From the first day of its creation until recently the lecturers of the department were involved into productive scientific research. In 1933 associate professor Mark D. Sigidin wrote the paper “The Law of Great Numbers” which was published in the journal “Bulletin of the Narkompros of Ukrainian Republic”. On the same year he published a textbook and a book of mathematical problems for the students of technical colleges (to date this textbook was reprinted three times).

In 1962 the Department was headed by an associate professor Mark R. Rogovyi, PhD in Physics and Mathematics, who was a professional in the field of Differential Geometry. His name is connected with development and practical implementation of new academic courses within the Department, namely, “Theory of Probability and Mathematical statistics”, “Mathematical Programming”.

In 1965 professor Mikhail I. Kadets, Doctor of Science in Physics and Mathematics, specialist in functional analysis, was appointed as a Head of the Department of Higher Mathematics. When professor M. I. Kadets, an efficient researcher and mathematician, joined the Department, this greatly stimulated the scientific work. The scientific seminar on functional analysis was organized, which later became a city-wide seminar. Post-graduate studies was created at the Department which has become very productive and efficient. Nineteen PhD students were trained under the supervision of professor Mikhail I. Kadets. Seven of them later got Doctor degree in Physics and Mathematics including a former lecturer of the Department B.V. Godun, who works now at Kherson Technical University. S.L. Troyanskyi became a Correspondent Member of the Academy of Science of Bulgaria.

Professor Mikhail I. Kadets was awarded the title of the Honoured Worker of Sciences and Engineering of Ukraine (1991), the Soros Professor (1997), the (убрать) Honoured Professor of Kharkiv State Academy of Municipal Economy (1998), the Presidential Scholar (1999).

By the order of the President of Ukraine # 1782/2005 on 19.12.2005, Mikhail I. Kadets was awarded the State Prize of Ukraine in the field of science and engineering for a series of monographs “Geometry and Topology of Finite-dimentional and Infinite-dimentional Multimodes and Submultimodes”.

Professor Mikhail I. Kadets is the author of more than 80 scientific papers including two monographs. He regularly participated in scientific conferences and visited the universities of Bulgaria, Austria, Spain and Israel as a guest professor. 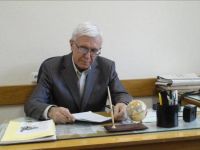 The Head of the Department of Higher Mathematics Anatolyi I. Kolosov, Doctor of Science in Physics and Mathematics, is an efficient researcher and lecturer. He is the author of more than 30 scientific papers. Nonlinear boundary value problems for ordinary differential equations, nonlinear operator equations in semi-ordered spaces are among his scientific interests.

We have 496 guests and no members online